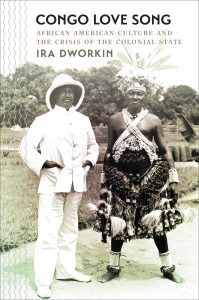 “The book’s primary concern is to trace multiple routes of political engagement by African Americans . . . as being central to the making of modern black political culture. It meets this aim admirably.”–Jeff Kerr-Ritchie, Choice

Congo Love Song: African American Culture and the Crisis of the Colonial State, published by UNC Press, is available through booksellers and online vendors. Books may also be ordered through the UNC Press website at www.uncpress.org or by calling 1-800-848-6224.